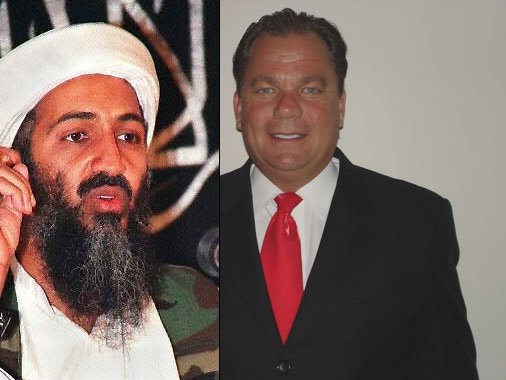 “I stand up to state and defend the interests of the United States of America and most importantly the people of our nation. While I agree with our administration and the governments around the world that we do not negotiate with terrorists in a democracy, it certainly seems to be confusing because there is negotiation going on all the time in the Palestinian region with Hamas and Hezbollah and further negations with other terrorist organizations and with other rouge states,” stated Imperato.

In light of this fact, Imperato offered up himself to negotiate a truce with Bin Laden.

“I offer up myself as a United States citizen to collaborate with the Bin Laden Organization to discuss a peaceful resolve to the ongoing disastrous situation that is at hand,” said Imperato.

One thing that Imperato pointed out in his address was the person who threw the first punch, Bill Clinton.

“I come to bring to the attention of the American people and the rest of the world that it was Bill Clinton and that administration that launched and pushed the first button against Bin Laden, while Bill was on Monica Lewinsky. Bin laden may or may not have been organizing attacks against the United States and the rest of the world, but it is true that Bill Clinton pushed the button first and Bin Laden retaliated as a defense mechanism because when somebody attacks you, you usually retaliate,” explained Imperato.

Since Bin Laden’s war against America, Imperato pointed out that Bin Laden has revealed major security deficiencies in our system.

“The message that Bin Laden has given around the world is clear. The United States of America, its government, and its policies are not impenetrable. The security of the people of the United States of America has been breached based upon the inappropriate intelligence operations within our own society and the inappropriate activities within our own political parties such as the Democrats and Republicans, who waste more money bickering and fighting with each other instead of focusing on what’s best for our country,” asserted Imperato.

Yet despite what Bin Laden has done to the people of the world, Imperato felt that we should at least here him out.

“I believe Bin Laden should be given an opportunity to discuss a truce and peaceful resolve to the everlasting destruction of humanity. I believe that in a democracy under the word of God, our leadership owes the right to Bin Laden to at least hear what his proposal is,” expressed Imperato.
Before any such meetings, Imperato made it clear that both sides should call a cease fire.

“If I was the president of the United States I would openly call for a cease fire by the Bin Laden organization and an immediate withdrawal of all terrorist activity created by any and all Bin Laden Organization people,” said Imperato.

Additionally, Imperato outlined his strategy to negotiate a truce.

“I would give a 30 day window of opportunity to listen to what Bin Laden would have to say and see if it is a sincere truce and it is really him. I would also call on the American people to allow a certain group of talented individuals to discuss the opportunity through the Bin Laden representation in the United Arab Emirates, a neutral safe haven for both parties. There would be a representative of the Bin Laden Organization in the United Arab Emirates with a representative from the US,” stated Imperato.

While most politicians deal in rhetoric, Imperato wanted it to be clear that he is serious about making peace.

“I am ready, willing, and able to be that individual to stand up to the face of Bin Laden or to anyone of his followers, advisors, or administration to see if we can come to an agreement for peace in the region,” expressed Imperato.

However, Imperato suggested that Bin Laden may not be to blame for all of the world’s terrorist activity.

“I do believe that several factions have split and gone on to further their own terrorist activities far beyond what Bin Laden has the capability of controlling. Ever since the attack on Bin Laden by the USA, the organization has spread around the world and has cut up into individual cells making it more difficult for him to control them and making it more difficult for us to really understand whether or not he has been in power,” explained Imperato.

While Clinton was wrong to bomb Africa and Afghanistan, Imperato also pointed out that George W. Bush has not made the situation with Bin Laden any better.

“I believe that the Bush administration catapulted a terrorist attack into a major global war on terror. He has identified Iraq as a sponsor of terror and has attacked Iraq for ulterior motives. I believe that these motives must stop and that the people of the United States must know the truth,” expressed Imperato.

Due to the nature of the US relations with the rest of the world and Al-Qaeda’s presence, Imperato felt that this peace treaty could be the biggest that the world has seen.

“I call on the people to support me in my mission to meet with the representatives of the Bin Laden Organization to discuss and hear the proposals for truce. I feel that I could possibly be in the individual to be able to maintain the integrity, dignity, and cool atmosphere in order to pull off what could be the greatest peace treaty in the history of our country and the history of our world,” stated Imperato.

In order to have peace, Imperato urged people to understand why people have hate towards Americans.

“Everybody in the world has their own opinion including myself. I think that we cannot, as a global society, live in terror and we cannot live in this situation any longer. It’s time that it stops.”

Imperato also felt that while in the Middle East, he could broker a resolution to the Iranian nuclear situation.

“In addition I would like in the same trip to the Middle East the opportunity to meet with the Iranian President and to discuss also a diplomatic peaceful relation with Iran and its nuclear program. I do believe that the president of Iran is sincerely interested in peace. I also believe that the Bush administration has surrounded Iran with in such a way that the tremble is being felt in their country and the possibility of their country being attacked is real,” explained Imperato.

Due to external pressure, according to Imperato, Iran’s President Ahmadinejad has started his own nuclear program for Iran’s security.

“I believe that the Iranian president is going to fight back just as Bin Laden did because after all we would all fight back. I ask the people of the United States of America to give me the chance to represent our country and the people in it,” stated Imperato.

Yet while Imperato could initiate the peace process himself, because of the nature and scope of the project he wanted the support the United States government and the world.

“As I know it’s a free world and it’s a democracy that we have in the United States of America. But in light of the fact of the political situation and security breach, I would only ask the authorization of the United States Government and the political people behind the posture to enable me the opportunity to proceed forward in such meeting,” explained Imperato.

Imperato concluded his statement with the following remarks, “I am ready and willing to stand up, put my life on the line, my wisdom on the table, and my ability to negotiate to show the American people and the rest of the world that I mean business about being president of this country in 2008 and not for four but only for more. I will represent the people of the United States and their best interest and I will put my life on the line to do so.”