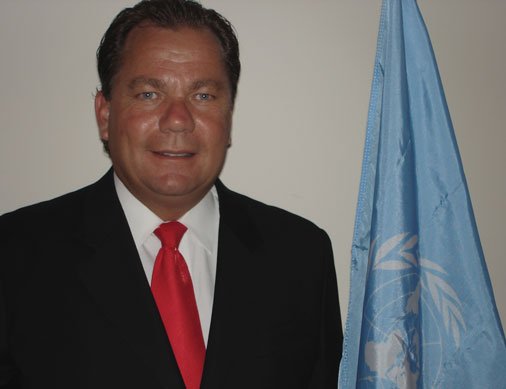 January 5, 2005 – West Palm Beach, FL – Today, 2008 US Presidential Contender Daniel Imperato issued an advisory statement to the United States Government on the subject of Bolivia, Latin America, and the spread of socialism.

“I call on our administration to pay close attention to the newly elected president in Bolivia, Mr. Evo Morales, and take action to halt the direction that Bolivia may be heading towards. The people of the United States of America need to know that our South American neighbors and our Spanish brothers and sisters have been neglected by this administration and several administrations in the past,” stated Imperato.

Imperato believes that Venezuela and now Bolivia have turned towards their political course due to a lack of US support and involvement in the region.

“As president of the United States of America in 2008 I will request support from the United States and its people to strengthen relations with Latin America. I am concerned that it may be too late, but because I am a man of faith, I believe all things are possible,” expressed Imperato.

The key to improving relations in the region, according to Imperato, was through accessing the political capital maintained by the Vatican in the region.

“The United States of America, our administration, and President George W. Bush, who was not well-received by our late Pope John Paul II and the Vatican because of his war policy, must immediately access Vatican officials and the support of Pope Benedict XVI pertaining to Bolivia,” asserted Imperato.

“I call on George Bush and our administration to call on Pope Benedict XVI in Vatican city-state in Rome, to help Bolivia and to rekindle Pope John Paul II’s huge social and political accomplishments in the country of Bolivia which now maybe in great danger.”

Due to Bush administration’s lack of action regarding the growing socialism in the region, Imperato suggested that they have no clue what is going on.

“I do not believe that our administration and our President Bush have any idea of the makings, doings, and going-ons of Latin America. We are losing footage in our Caribbean islands to other interests. The Latin American countries are working collectively with those interests and are creating distance and socialistic economies that prove to be detrimental to the United States of America and its people,” stated Imperato.

“By the way with our second language being Spanish, it must be realized that the Spanish population in the United States of America hold a strong position, particularly in the areas of immigration of persons in the region that are obviously not protecting democracy,” said Imperato.

In order to protect US interest in our hemisphere, Imperato advised that our nation forge stronger ties with Cuba.

“We have to embrace Cuba and win Fidel Castro’s support. Why? Because China, is granting lines of credit to Cuba and at the same time buying up the Caribbean, specifically Grand Bahama Island and its air and seaport; the wedge here is clear as day. China wedges the Caribbean islands and the Bahamas, tilts Cuba, infects Venezuela and Bolivia and demands Taiwan,” asserted Imperato.

Imperato feared that our administration is “so focused on other issues that our country is in grave danger of losing its closest neighbors.”

“If our administration will not step up to the plate and address this situation then I offer myself to the administration to assist in this urgent matter. When I look out my window to the south I see the ocean, the Bahamas, the Caribbean, Cuba, and South America being the closest threat to our society,” asserted Imperato.

According to Imperato, the most recent event to cause our lack of involvement in the region was the US relinquishment of power in the Panama Canal.

“I believe that giving up the Panama Canal was the beginning of the threat and that the United States of America and our administration have taken their eye off the ball and particularly the alienation of the Bush administration of our late Pope John Paul II’s philosophy of peace and his strength in these Latin American countries.”

Imperato finished his statement as follows, “I ask the people of the United States of America to vote for me in 2008 and to give me the chance to rekindle our neighbor’s relationships and to reestablish the force of Cathology in the region and for the US to support the principles of Christianity and the philosophy of our late Pope John Paul II astonishing intelligence.”

Imperato on Bin Laden, Afghanistan, and The Poppy